The Canadian group My Sweet Patootie, composed of former members of Tanglefoot, will be performing 7:00 pm on November 10, 2012 at the Meyera Oberndorf Virginia Beach Central Library.

Forget the Bieb, here’s what we need…

While surfing through YouTube looking for the perfect song about how I’m feeling—you know, because my life always needs a soundtrack because I’m SO famous and stuff—I came to the realization that there are so many things in life that we don’t really have songs about—at least, not explicitly about.

We have plenty of songs about love and sex, some about death, and some annoying ones that pretty much just call girls “baby” over and over again, but where are the songs about protest today? We have a lot from the sixties and seventies we borrow, but I can only think of a handful of good songs today about what we are experiencing. We need some more women power anthems to stand up against this whole War on Women. How about a “Marriage Equals Heart Plus Heart” song?

And there are so many universal emotions we go through that could be epitomized in song. We have plenty of angsty adolescent songs about breakups and unrequited love, sure—but what about conflict between mothers and daughters, fathers and sons, siblings? Again, I can’t think of many, yet these are things we all feel so deeply!

Then again, there are plenty of songs that could work for such things that are intended for others. The two songs that I keep playing right now in my anger and hurt while I lick my wounds are “Disease” by Matchbox 20 and “Gives You Hell” by the All-American Rejects. The funny thing is, these two songs used to apply to a best friend of mine from childhood, an older girl who really did a psychological number on me; today they apply, sadly, to people much closer, who’ve impacted me my whole life and hence wound me far more deeply.

Could you imagine how much money there is to be made off of songs that we need? I’m not saying that’s why they should be written, only imploring artists to create something to help us through this messiness. Songwriting is not one of my talents—my father will tell you differently, though I recall the lyrics he claimed to be golden as being very similar to the baby-baby lyrics of the Bieb himself, written ten years earlier—but I would happily buy any music that could help me through so much pain today, just as I happily purchased the music that helped me through other times in my life before. And I know many others would do so, too. Cardinal has four tracks on Bandcamp. They’re all under three minutes long, and they all sound exactly as good as you’d expect from one of the countries long standing emo hubs of Virginia Beach. This guy’s voice is really appropriate for this genre. These songs make me think I’m back in the early 2000s riding on a bus home from high school to my house and listening to an iPod classic. Isn’t it weird that iPods have been out long enough now for me to be able to reminisce about using the first ones?

In any case, Cardinal is a really solid band. These guys are saying things that they need to say and playing things that support the songs. I really like the drummer. He’s throwing it all out there on every song. That’s important. There are too many bands that having emotional songs with constantly sparse drumming. Minimalism is truly awesome sometimes, but only sometimes. Other times, songs would really benefit from some all out drum pounding. Cardinal’s drummer understands that and pounds his drums away very sufficiently.

Everyone else in this band is doing great things for their genre as well. The guitar is interesting. The bass is supportive. The vocals are very appropriately toned, and the lyrics make it the genre it is. If you get the chance to go out and see Cardinal, you should go for it. You never know what a band is going to sound like from their recordings any more, but Cardinal is a safe bet for a good show.

This two-part single from Virginia Beach punk outfit bamm bamm is literally over in a minute, but the ultra-short-form works with their brash stylings. Let's hope there are more mini-songs in the works. There’s a band in Virginia Beach called The Vaginasaurs who recorded an eight track album in the den of a castle by the bay. This surf rock/baby punk seems like it would be awesome to see live. You can check it out on one of their five upcoming shows in Pennsylvania, New York, and Virginia! Head to their Facebook to find more details. All of these shows look like tons of fun. The pictures on their Tumblr suggest that their shows are super rad and cute in all the right ways.

“If You Want Me 2!” is probably my favorite track on the album. It starts out with “One, Two, Three, Roar!” in the cutest chant I’ve heard. This song is actually ultra sad though. In the chorus, she said she’ll let go of somebody if they want her to. That’d be a rough message to get through a song. This song is the shortest on the album, coming in at only one minute and nine seconds, but it’s message is really strong and way too relatable. They have another version of this song that isn’t live, and it’s really good too. The vocals are so mysterious though. I like the effects here, but if I hadn’t heard the live version, I probably wouldn’t have been able to figure out what she was saying.

“Telephone Alaska” is a really, really solid song. I hope they record another version of this one, but the live one is totally worth checking out. Pull open the lyrics and read along! If I was going to listen to poppy hardcore rock, I would listen to this band. This makes me think of great times in high school, and I definitely like it. Virginia Beach is dominated by power pop bands, but Turnover totally stands out the most.

These dudes put out their self-titled EP in March 2011. You can find its five songs on their Bandcamp, and if you like anything in Virginia Beach, I’d definitely recommend this. It got a 9/10 review on Absolute Punk.

Danny Dempsey is a really neat guy. He collects vinyl and plays bass in Turnover.

Turnover is signed to Broken Rim Records. If you like Title Fight, Citizen, or Transit, go check out this label. Turnover is doing really well in this genre.

These songs are all really solid. They’re pretty straight to the point, and you can immediately enjoy them. I especially liked “Time”. It seems a bit more serious than the others, and as always the recording quality is great. All these songs seem pretty nostalgic, but this one does especially. Songs like that are great, and this one is appropriately titled. What’s more nostalgic than time? Time is the fundamental thing that creates nostalgia, I’d say.

If you’re around Virginia Beach and you can, be sure to check these guys out at a show. If you aren’t, head over to their Bandcamp page and enjoy some quality power pop! You can download the whole five-track album for five dollars, and if this is your genre, I’d absolutely recommend. I love 80s electronic beats and synthesizers, and Caverns does both really well on their album “Samples I” on Bandcamp. Every track says it’s an unfinished sample, and I know that the finished product is going to be incredible. These songs go on for under a minute for the most part, and then when you’re ready for something great to happen, they’re over. Check them out now and gain an insatiable sense of excitement.

“Glass” is really great as well. I could’ve seen this being in the recent film “Drive”. There are some really glassy tones in there, and the bass synth is perfectly distorted. This is the track I would be most excited to hear the completed version of. It’s got the most variation.

The album closes out with “Lines” and “Slight” which are both sure to be great completed tracks. “Lines” has a very interesting bass groove, and I really didn’t want it to end. “Slight” has an incredible Killers sounding synth right from the start. The drums are really bassy too, and it’s great.

If you’re a fan of 80s electronics, you should totally check out Virginia Beach’s Caverns.

A nice filtered hush gives way to a great bedroom pop build. This is the sound of the seconds before waking. 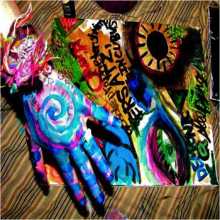 Chris Ledbury of Carnival Bird has another project called Berries. Berries is tagged as “alternative, beach chillin babes, and Virginia Beach”. I can definitely imagine hanging out on a beach with some babes and chilling out to these tracks.

The first track, “Bird Bath” grooves out for just long enough before the vocals start up. Then the vocals are more atmospheric than attention demanding, and that’s a great thing for this song. This beat is so cool. These textures are so smooth.

The second track is shorter, but it’s also a bit beachier. I suppose it’s maximally beachy, in fact, since there are actual sounds of waves in it. Clean electric guitars, reverberated vocals, and upbeat drums make for a great “beach chillin babes” track.

This two song album is called “Sea Dance”, and you can get it for free on BandCamp. It’s got some more beautiful artwork, as you should expect from the guy behind Carnival Bird’s colorful theming.

There’s also a Facebook page that definitely needs to get some more backing. It’s only been up for a few months it appears, but it’s about time some more people learn about this one. Chris Ledbury is doing some really cool things, and I think you’d enjoy it.

Oh! There’s another song called “Sun” that you can find on the Facebook page. It’s got some nice rain sounds, and plenty more reverberated vocals. This one is a slow jam, and it’s really nice and pretty. Check it out! You’ll probably love it!

Hot music, concerts, and bands from the Virginia Beach area

We Support
Climate Activism
Click to reach the League of Conservation Voters.
Conversation Processing Intelligence™ beta website!
Click here to visit the hub of the Klat Network.
This site is part of the Klat network of blogs, forums, and communities.

Songs we could use